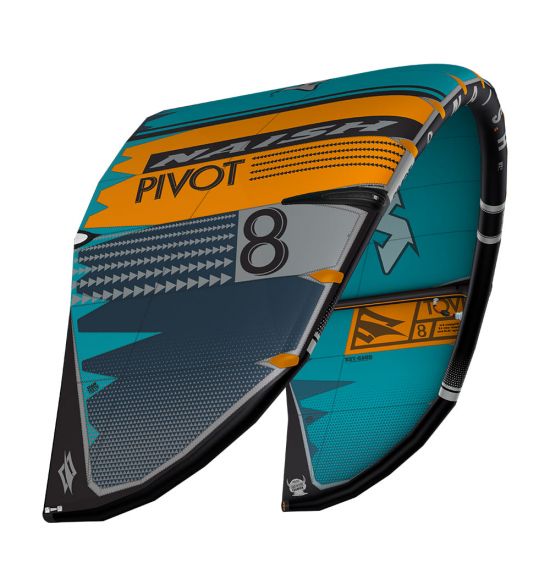 2 times winner of Red Bull King of the Air, the Pivot is direct, versatile and ef cient, maintaining its standout performer status in the Naish kite line.

Perfect for both novice and professional kiters alike, the Pivot provides plenty of sheet-in-and-go, predictable power, direct bar pressure, easy jumping and control in the air. The superior choice for versatile performance, the Pivot maintains a large wind range, proving dynamic and responsive in everything from waves to at water.

It has earned an impressive reputation for its intuitive steering and tight, quick axis of rotation and this new generation continues to push its capabilities even further. With the Quad-Tex material, we have managed to remove heavy dacron panels along the struts—reducing weight while retaining canopy rigidity. The leading edge seam is made with our exclusive thread that has tested off the charts in overall strength. The Pivot also comes with our exclusive Bladder Lock, which eliminates the risk of bladder movement in the leading edge and struts to ensure they stay in place when inflating, deflating, crashing or packing.

While the Pivot has received various tweaks and improvements that enhance the performance characteristics, it continues to stay true to its loyal following and remain as one of the most sought after kites worldwide.

What Does It Do?

Why Is It Unique?

The rst dedicated freeride kite that became the kite of choice of Kevin Langeree that won him 2018 & 2019 Red Bull King of the Air.

This year we have ne tuned the tension in the whole canopy by adding a seam that spreads the back line tension further towards the center of the kite for an even more powerful and balanced kite as well as the new OnePoint and SureLock In ation System.